This is an excellent (and fairly non judgemental) outline of the Brexit process and why and how it got messy quite so quickly from Professor Anand Menon, Director of the UK in a Changing Europe… 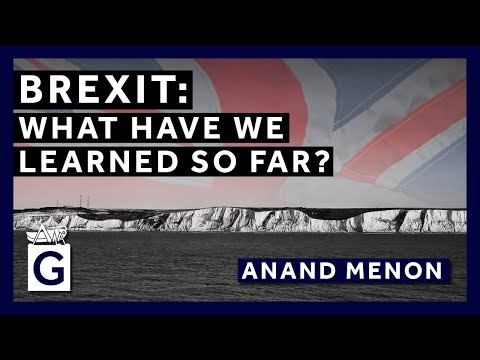 Now within those headings there is plenty of room for disagreement especially around the why questions (and whether you believe the EU was ever going to do anything other than make it just sh!tty enough to discourage others from leaving).

But the components are sport on. In particular the lack of a coherent outline was not available beforehand, probably for the reason that any too specific proposals would have been easier to attack and not be able to make their way to majority status.

He doesn’t just apply that analysis to the campaign, but the muddle the Conservatives got themselves into when the leading Brexiteer opponent to Mrs May withdrew so there was no clear mandate for her mediating approach to the question.

Most interestingly he points to the period of the indicative votes as a reflection of the general confusion in the country, so that those wanting a second confirmative referendum disagree as strongly with those wanting a softer version as Brexiteers.

A confusion which mirrored divisions in the country itself. As my old mucker Paul Evans argued here many years ago…

By making policy questions explicit, as Cass Sunstein illustrates at length, you polarise the arguments instead of promoting a rich debate and useful complex legislative responses.

Doubt and equivocation are a good thing. Instinctive certainty often isn’t. As Darwin put it, “Ignorance more frequently begets confidence than does knowledge.“ Doubters and equivocators are more likely to abstain in referendums, and – following the logic of the Dunning-Kruger effect, that’s a bad thing

Do set aside some time to watch it. By going upstream Manon allows us to do a little of what the philosopher Ludwig Wittgenstein counselled us to do what too many [Twitter addicted? – Ed] commentators on Brexit prefer to ignore…

Don’t get involved in partial problems, but always take flight to where there is a free view over the whole single great problem, even if this view is still not a clear one.