The significance of the Ulster Hall as a venue would not be lost on the audience of the Ireland’s Future event last night. From Carson to Ulster Resistance, the Ulster Hall has been the home to many Unionist protest rallies.

It is a measure of how the times are changing in that while the event was sold out, the protest outside could only muster 7 people.

The event opened with a panel of people from Protestant backgrounds, who had either come round to the idea of reunification or were at least open to the possibility. Re-curious you could say.

Some had quite the conversion story, none more so than Glenn Bradley. It is quite the journey from being a British soldier, then a UUP party officer, to being on stage at a Nationalist event.

It is a lazy criticism to declare these people treacherous Lundys. It ignores the diversity of opinion that has always been present in Protestantism. Our own Claire Mitchell spoke about how her family always supported Irish Unity, and how they always had Irish Passports. In Claire’s new book ‘The Ghost Limb‘ she highlights the personal stories of many people who, to use the evangelical term, have not had a ‘conversion experience’. They have always been comfortable with their Irish Identity.

Fine Gael Councillor Lorraine Hall spoke about coming from Cootehill, County Cavan, which she described as the ‘most Protestant small town in the Republic’, having 4 Protestant churches and an Orange Hall.

She described how her Protestant identity has never felt threatened and she pointed out the many Protestant churches and schools in Dublin where she now lives.

What was impressive about the panel was the lack of ideology. They came across as people who weighing up the evidence, concluded that reunification is either desirable or least not something to be overly concerned about.

Obviously, you can’t make sweeping judgements on the basis of 6 people. But the middle ground will be the deciding vote in a border poll and Unionists should be worried that the old scare tactics of ‘Rome rule’ etc are no longer effective.

After the debate, there were speeches from a range of speakers. I will not go into detail as you can watch them yourself on the video. 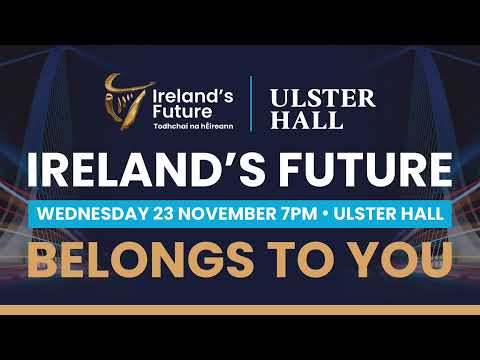 Dr Conor Patterson make some interesting observations about the importance of an all-island health service. Confusingly Dr Patterson is not a medical doctor but CEO of Newry and Mourne Co-operative and Enterprise Agency. Still with his experience of living and working in a border area his comments were relevant.

He pointed out the absurdity of Daisy Hill Hospital in Newry, basically ignoring half its catchment area (the population on the other side of the border).

With Dundalk being closer to Newry than Belfast, does it not make sense to at the very least have cross border arrangements for healthcare? Likewise with Derry and the Donegal Region, Enniskillen with Sligo, Monaghan and Cavan.

I have an interest in health, so for me, this was the most important point of the evening. When you step back and think about it, it is absolutely bonkers not to have an all island health service on a small island.

The warmest reception of the night was for Professor Colin Harvey. I interpreted the welcome as solidarity with him after the terrible attacks he has been subjected to over the past few years. It was the first time I heard his speaking live: he is a class act – you can see his section 2 hours 6mins in on the video. He spoke clearly and without notes. In our digital age, is it a pleasure to watch a good orator in action.

The guest speaker of the night was SNP President Michael Russell. To be honest, it was the first time I had ever heard of the guy, but reading his Wikipedia page, he seems quite the character.

The key message of the evening was a demand for an All Ireland Citizens Assembly to discuss the future of the Island – expect to hear a lot more about that in the future.

Overall it was an informative evening. My one criticism would be with so many speakers, it was possibly too informative. Running for 2 and a half hours, it challenged the buttocks and bladder as well as the mind.

I think these large setpiece events have run their course. If I were Ireland’s Future, I would be looking to move beyond the big picture stuff and get on with the specifics of how Irish Reunification will work.

In my mind, most people have accepted that a border poll is coming, but they need to understand how it will specifically affect them. People need to be very clear on what they will be voting for. They say people vote with their wallets. What happens to their pensions, mortgages etc? Will they be better off in a United Ireland? Will they be richer? Heathier? Have a better standard of living?

Ireland’s Future has done a good job of selling the vision, but now it is time to get into the nitty-gritty of what Reunification will entail.