Arnold Carton is a retired schoolteacher from Belfast.

I was one of the minority of unionists who ignored the advice and abuse from Sammy Wilson and attended Ireland’s Future in Dublin on 1st October, so was the €10 ticket, money well spent? What was the event for, and what did I or anyone else gain from going?

We must accept that the perception of a unionist attending this event will probably be different from that of a nationalist, but Ireland’s Future seemed to me to have three aims:

Because of the size of the event, the media coverage and the crowd-pleasing speeches from some, I have no doubt that objectives 1 and 2 were achieved. Sinn Fein’s MaryLou McDonald was given the very prominent spot at the end, just before James Nesbitt’s outstanding speech, and there was an unsuccessful attempt to give her a standing ovation. Those who wanted to believe that Irish unity was on its way will have been encouraged.

However, the 3rd objective of encouraging discussion on the means by which Irish unity could be achieved was much less successful because the momentous task of dealing with unionism was too challenging for some. Neale Richmond and Leo Varadkar attempted to reach out to unionists, as did some other speakers in the Civic Society section but it was clear that this was not popular with sections of the crowd. Mr Varadkar was booed by some and after a conversation with some of those involved, I believe there is a lack of understanding of unionism that Ireland’s Future has failed to address. (Have they really tried?)

So, was it worthwhile for me or any other unelected unionist to attend?

I think the answer is yes.

Just as it is wrong for nationalists to assume that Irish unity is inevitable, it is also wrong for us unionists to assume that Irish unity could never happen. Irrespective of what decision is made (possibly by our children or grandchildren) Northern Ireland will remain as one unit, and we will continue to live together as unionist and nationalist neighbours. It is important that unionists understand and respect their nationalist neighbours, especially if their desire for Irish unity is thwarted, in the same way it is important they understand us unionists, especially if our desires are thwarted and we find ourselves in an Irish state.

Only by continuing to engage will this be achieved and because neither side is likely to be completely satisfied, both communities may be in need of a sympathetic understanding from the other. We need to talk.

You can re-watch the Ireland’s Future event below. For those not wishing to sit through all 4 hours of it, most people say the Jimmy Nesbitt speech was the highlight. You can see it at 3 hours 30mins in. 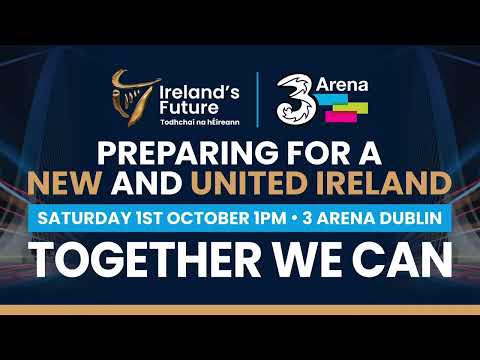