Last Friday, I filmed and live-streamed a fascinating lecture by the Plaid Cymru leader Adam Price, delivered in Dublin to an assembled and online hybrid audience for the Irish Association for Contemporary European Studies. 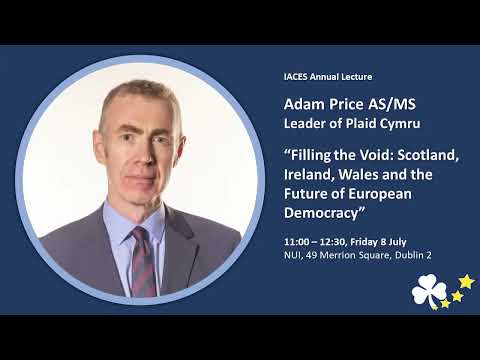 Fascinating for a number of reasons. I rarely hear any local discussion of devolution in Wales, other than noting that they have fewer policy areas devolved than Scotland and Northern Ireland. A talk more than a decade ago demonstrated how the Senedd was ahead of other devolved parliaments in terms of citizen engagements. But I was also intrigued to hear on Friday about the working relationship between Welsh Labour and Plaid Cymru – Price described is as “co-opposition” with an agreement to support a specific subset of policy objective, freedom to vote independently in other areas, and a couple of special advisers appointed to help oversee the three-year deal within the Welsh Government. And Plaid Cymru have lock, stock and barrel borrowed Sinn Féin’s housing playbook to connect with voters.

Newton Emerson referred in Saturday’s Irish News to a House of Commons statement by NIO minister Conor Burns which seemed to push any review that could lead to a reform of Stormont’s two-communities-not-three structures into 2023:

Responding to Alliance proposals to reform Stormont, including removing the veto of the two largest parties on forming an executive, Burns said the government’s focus is to restore power-sharing under its current rules. However, reform should then be considered by a review on the 25th anniversary of the Good Friday Agreement next year, bringing together parties, civic groups and universities to “update” the institutions with “cross-community consent”.

Perhaps, NI parties should be examining Welsh approaches to cross-party working – the initial implementation is unlikely to be perfect in all aspects – in case there are useful lessons for Stormont’s even more complicated setup.

Adam Price’s lecture was inspired by and sought to respond to the challenge laid down in the late Peter Mair’s Ruling the Void: the Hollowing of Western Democracy. He explored whether and how political parties can be laboratories for democratic renewal. He examined the role of and relationship between the leading nationalist forces in Scotland, Ireland and Wales – the SNP, Sinn Féin and Plaid Cymru – arguing that their campaigns for democratic self-government provide an opportunity to demonstrate how the failings of western democracy can be addressed. The European dimension to these campaigns was also explored.