The implementation of the Northern Ireland Protocol has focused attention on present and future trading relations between this and other regions of the United Kingdom and the European Union. However, a brief reflection on the movement of goods in the past might help bring perspective to the debate. In the words of George Santayana, “those who fail to learn from the mistakes of their predecessors are destined to repeat them.”

Long before the launch of the first Larne-Cairnryan ferry, the North Channel was a bustling maritime crossing point. With only 12 miles separating Torr Head in Co. Antrim and the Mull of Kintyre in Argyll and Bute in south-west Scotland, the inhabitants of the north-east of Ireland have always had strong cultural and commercial ties with Britain. This region has also acted as a conduit for the movement of goods and people between the south of Ireland and Britain, and even on to continental Europe. In the absence of written records, for the earliest proof of this we must examine what physical evidence remains, and this is often just below our feet.

Archaeologists have developed several theories to explain both the practical and ritual deposition of collections of valuable objects known as hoards. The Malone hoard, on display in the Ulster Museum in Belfast, is a collection of 19 large, finely polished stone axe heads discovered at Danesfort House on the Malone Road between 1869 and 1918. Dated to the Neolithic period (c. 4000-2500 BC) they appear unused and are indeed too cumbersome to have served as functional implements. They are, therefore, thought to have had some ceremonial purpose with several found buries in a circular arrangement with their blades pointing outward.

The Malone axe heads were made of porcellanite, a grey sedimentary rock with a matte lustre similar to unglazed porcelain with only two confirmed sources in Britain and Ireland, both in Co. Antrim. One is at Tievebulliagh Mountain, near Cushendall and the other at Brockley, on Rathlin Island. Of the c. 20,000 recovered stone axes known to have been manufactured in Ireland, over half were made from porcellanite. While many of these remained in the north-east, transported down the River Bann for local distribution, a few travelled south, and large numbers were exported to destinations ranging from Shetland to Cornwall.

The journey across the Irish Sea in a dugout logboat, laden with a cargo that included heavy stone axe heads, would not have been for the faint-hearted, notwithstanding the absence of bothersome bureaucracy. It is just conceivable, however, that a concentration of porcellanite axe heads around the Firth of Clyde represents a form of import tax levied at what would have been, in effect, a Neolithic border station, not in the middle of the Irish Sea but on mainland Britain! A second cluster in Aberdeenshire is less easily explained. Unless perhaps it represents the point of payment of a departure tax due on goods continuing south, and there is compelling evidence for such long-distance trade. On display in the National Museum of Ireland in Dublin are four pieces of worked jadeitite and a sawn piece of raw material from the Alpine region of Monte Viso, in north-west Italy close to the French border.

Beautifully polished stone axe heads were not the only manufactured goods to leave Ireland in prehistoric times. As metal began to replace stone as the material of choice for weapons, tools, and ornaments, established trade routes could be utilised to transport these new products far beyond Irish shores. And vessels capable of this task are known to have been available. Long before the launch of the Titanic into Belfast Lough, an ocean-going behemoth lay moored in a shallow lake by the Atlantic coast in Lurgan Townland, Co. Galway. Carved from the trunk of an enormous oak tree and possibly using an outrigger for added stability, this dugout canoe was radiocarbon dated to the time of the transition from the Neolithic to the Early Bronze Age (c. 2150-1600 BC). It measured 1 metre wide and 15 metres long, longer than a Translink Metro bus.

In the Early Bronze Age, gold from the Mourne Mountains in Co. Down helped Ireland became preeminent at working this precious metal. More than 80 decorated lunulae, quintessentially Irish crescent-shaped sheet-gold neck ornaments, have been found in Britain and Ireland with at least 10 more scattered across western Europe. The repeated chevrons, crescents and band and triangle motifs used to decorate gold lunulae, as well as copper-alloy flat axes, daggers, spear heads and short swords, are derived from ‘Beaker’ style pottery probably introduced to Ireland by Iberian metal prospectors c. 2400 BC. The focus of their attention was a site at Ross Island, Co. Kerry, which became the earliest known copper mine in north-west Europe.

The ‘Beaker package’ is now represented by the material remains of a cultural phenomenon that swept across Late Prehistoric Europe from Iberia to Scandinavia. Copper daggers were a key component of this assemblage of mainly burial goods and were the earliest metal weapons in Ireland. A popular development of the dagger was the Irish halberd, possibly a Hiberno-Iberian innovation that saw a triangular metal blade fastened at right-angles to the end of a wooden shaft. Halberds were a relatively short-lived weapon and, with the transition to the Middle Bronze Age (c.1600-1150 BC), gave way to the first bronze swords and spears.

A slab in a stone burial cist in Kilmartin Glen, Mid Argyll, was decorated with a representation of a halberd and a hoard of four copper halberd blades was discovered at Largizean on the Isle of Bute. Three were cast from Irish copper and the fourth of copper that possibly originated in Iberia. Kilmartin Glen has one of the richest concentrations of prehistoric monuments in Scotland. It acted as a gateway to the Great Glen allowing the movement of Irish materials, goods, and people across to north-east Scotland and beyond. A Bronze Age burial in a logboat coffin in Seafield West near Inverness was accompanied by a small bronze dagger made of Irish copper and an Irish style ceramic bowl. An earlier Beaker style grave from nearby Culduthel contained an adult male. Isotopic analysis of the enamel from one of his molar teeth established that he had spent his childhood in Co. Antrim.

Further down the eastern side of Scotland, two Middle Bronze Age Irish dirks were recovered from the River Tay in Perthshire. Both were decorated with a band and triangle motif and retain the rivets that secured their long perished organic hilts. A short Middle Bronze Age sword recovered from the River Bann in Bracknamuckley Townland, near Portglenone, Co. Antrim, shares the same decorative motif. Its hilt, however, had been attached with capped rivets. While unknown throughout Britain and Ireland these ‘Ringniete’ style rivets are common across the Rhine Delta region allowing for the possibility that this blade was an import, decorated after its arrival. Such finds might suggest that the north-east of Ireland was active in the international arms industry long before the launch of a Thales Starstreak surface to air missile.

The transition to the Iron Age (c. 700 BC-AD 450) (c.700 BC-AD 43 in Britain) saw no let-up in the use of gold for ritual and prestige possessions. An Early Iron Age (c. 700-300 BC) hoard found in 1896, in the Townland of Broighter, near Limavady in Co. Derry, was possibly an offering to the Irish sea god Manannan mac Lir. It consists of seven skilfully worked gold artifacts: a bowl; a model boat; two gold neck chains; two gold twisted bar torcs.

The small bowl, made from beaten gold sheet with four suspension rings, probably represents a bronze cauldron, a feasting vessel popular across Europe in the Later Bronze Age.

The model boat is just under 20cm long and is made from beaten gold sheet. It could represent an ocean-going vessel, either hide-covered or more likely of wood. It is complete with seats, oars, rowlocks, grapple, steering oar and mast. The Broighter boat offers unique insights into Irish sailing vessels of this period.

The gold collar, or torc, appears to be a composite piece, while the decorated tubular body is probably of Irish manufacture, the heavy terminals are of an earlier, continental style. Stylised birds and horses are accentuated by incised concentric arcs in the background. The origins of these ‘La Tène’ style motifs can be traced to an Iron Age culture centred in Switzerland and are believed to be the result of Greek and Etruscan influences on early Celtic artisans. A similar torc, along with other iconic Celtic items, can be seen in ‘The Dying Gaul’, a marble sculpture housed in the Capitoline Museums in Rome.

The clasped chain necklaces were made using a loop-in-loop technique. One is a triple chain, the other is single, both appear to be of Roman and Etruscan design. The remaining two items are twisted bar torcs of a type relatively common in Ireland.

When the British Museum purchased this hoard for its collection in London, it created a controversy reminiscent of that now surrounding the Elgin Marbles and the Benin Bronzes. Nationalist MP William Redmond supported a popular campaign for the return the hoard to Ireland that culminated in Sir Edward Carson’s ultimately successful, and precedent-setting, High Court battle in 1903. However, in 1941 the authenticity of the Broighter hoard was questioned by the Director of the National Museum of Ireland and Nazi activist Adolf Mahr who declared that it should be, “struck off the list … of La Tène art in Ireland”.

Thankfully Mahr was wrong in his judgment of this, as in other things, and the Broighter hoard, along with many more ancient treasures, survive to remind us that the north-east of Ireland has a long, dynamic, and outward-looking history and that Nationalist and Unionists can find common cause in a shared cultural past.

For further information on life in this period, a three-part video presentation, ‘People, Pots and Pointy Things: A Reassessment of Irish Bronze Age Material Culture’, can be found at The Ulster Archaeological Society’s YouTube Channel. 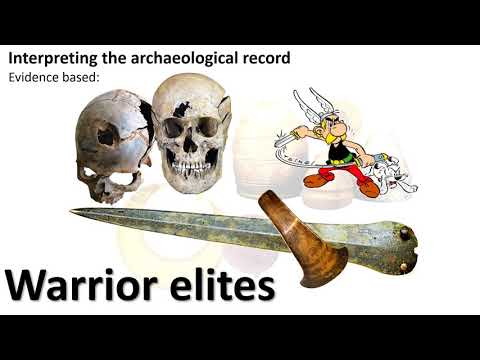 David Bell is a Postdoctoral Research Fellow in Archaeology and Palaeoecology at Queen’s University, Belfast. He is also a member of the Alliance Party and Humanists UK but is writing in an entirely personal capacity.