And so this is it.

One last outing for ‘Derry Girls’… and what a final outing!
Lisa McGee set her final episode of the sitcom one year on from the events of the previous night’s heartwrenching episode.
It began with a montage of images from previous episodes, playing to the sound of the bells of the Angelus.
Donna Traynor – who else? – was on TV screens asking the question on every ‘Derry Girls’ fan’s lips: “Could this be the end, forever?”
But we soon realised she was talking about the Troubles, as the people of Northern Ireland weighed up the merits of the Good Friday Agreement.
Louisa Harland’s Orla was in the Guildhall getting her photo taken for an ID card to vote in the agreement referendum.
Given a copy of the agreement, she was told to give it a good read.
“Is it any good ‘cos I have just read ‘The Lion, The Witch and The Wardrobe?'” she asked.
After bursts of John Hume and the Rev Ian Paisley on either side of the referendum argument, we were treated to a joyous sequence that could have been straight out of a Hollywood musical.
We watched Orla walk through her city, eating a cream horn and listening to Dario G’s ‘Sunchyme’ while dancing on Derry’s Walls with a troupe of young Irish dancers.
Director Michael Lennox also showed us Saoirse Monica Jackson’s Erin trying to read ‘Hamlet’ in the Foyle Books bookstore, Jamie Lee O’Donnell’s Michelle working alongside Paul Mallon’s Dennis the Angry Shopkeeper and Dylan Llewllyn’s James editing a video of the gang.
(SPOILER ALERT!!)
The first big revelation of the episode was that Nicola Coughlan’s Clare was wearing a different school uniform.
We subsequently learned in a phone call with Erin that Clare had left the city following the death of her father and was now living in Strabane because her widowed mother could no longer bear to be in Derry.
Meanwhile in the Quinn kitchen, Tara Lynne O’Neill’s Mary, Tommy Tiernan’s Gerry, Kathy Keira Clarke’s Sarah, Ian McElhinney’s Joe and the family’s youngest kid Anna were marvelling at their new microwave.
The Agreement and the chance to have a say on it in the referendum was preoccupying everyone’s mind, though – particularly Joe’s.
As Donna Traynor brandished a copy of the Agreement saying the 30 page document laid out its clauses in simple terms, Joe growled: “Simple terms, my arse!
“I’ve read through thon introduction 30 bloody times, I’m still none the wiser.”
As Mary continued to stare lovingly at her microwave, Sarah relayed Shauna Sharkey’s assessment of the agreement.
The Good Friday Agreement, she said, enabled people to identify as “British, Irish or bi”.
Gerry, however, wasn’t sure holding dual passports made you bi.
In her phone conversation with Clare, we learned Erin and Orla were due to have a joint 18th birthday celebration.
Erin wanted the theme to be literary greats.
Orla wanted it to be monkeys.
Mary wanted them to compromise, noting “compromising is all the rage these days”.
Ardal O’Hanlon’s Eamonn from Series Two appeared, wearing a bathrobe and a towel on his head – having moved into the Quinn family home after the roof of his house caved in.
Sarah was impressed by his legs, asking Eamonn if he exfoliated.
Gerry wasn’t enthralled by Eamonn living among them.
At the school assembly, Leah O’Rourke’s Jenny Joyce and her best friend, Beccy Henderson’s Aisling were telling the story of the peace process through interpretative dance under a ‘Choose Hope’ banner. 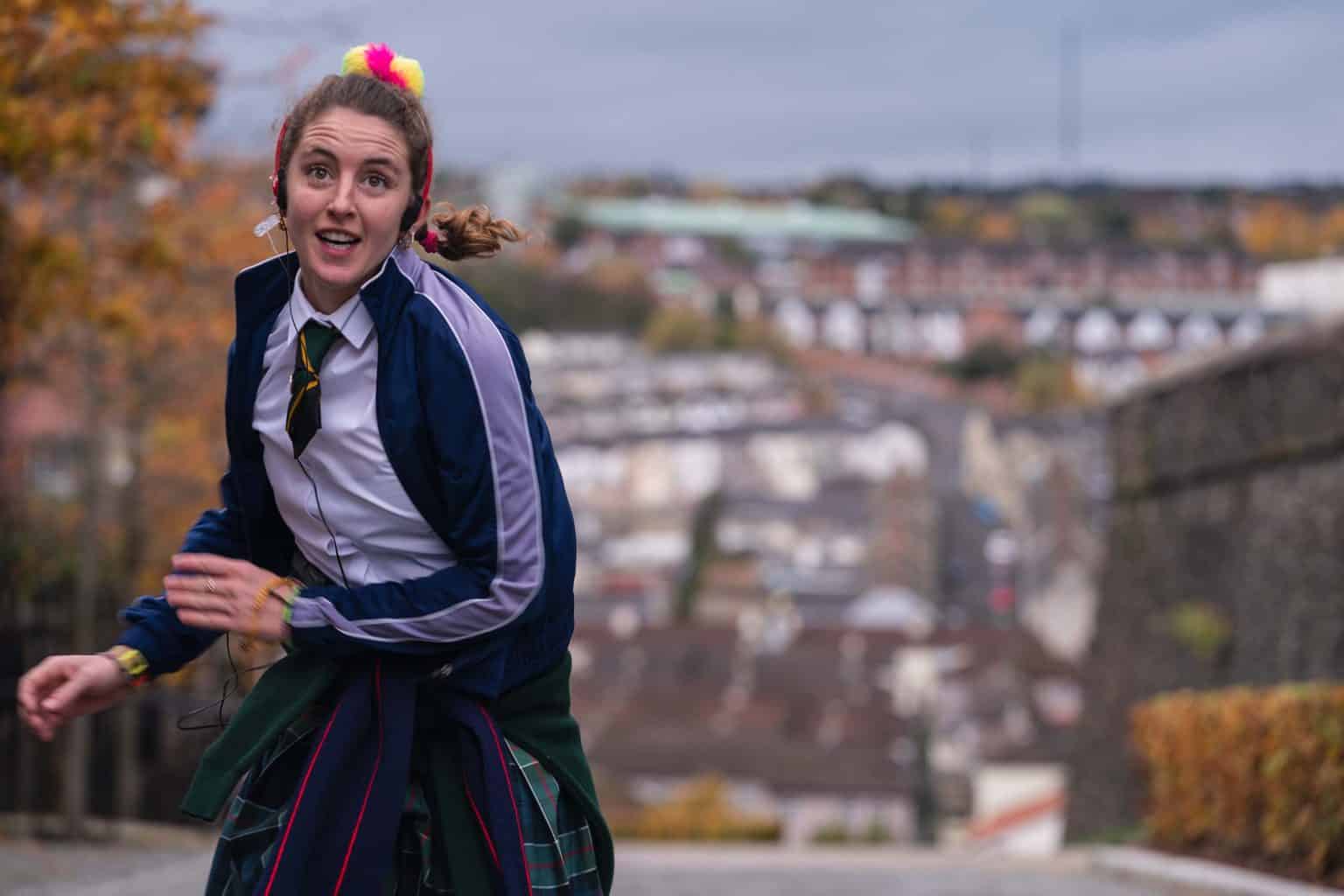 “I am a republican,” Aisling declared while wearing a balaclava.
“I am a loyalist,” Jenny said, also wearing a balaclava.
“I am affronted,” Erin sneered as the dancers brandished wooden swords.
“Are the IRA known for their swordsmanship?” a rather confused James asked, while his cousin Michelle surprisingly applauded the performance.
“Food for thought there,” Siobhan McSweeney’s Sister Michael noted.
“The conflict has had so many terrible atrocities and now we should add your play to that list.”
There was a bit of a clash between Erin and Jenny after assembly, as the latter revealed she was planning her own lavish party at her house.
Jenny dissed the “Literary Giants and Monkeys Party” that the Quinns were organising, which Orla explained was “Avant Garde”.
Michelle, however, insisted despite Jenny’s resources, Erin had one distinct advantage.
She could land Bronagh Gallagher because Michelle had agreed to snog a relative of the star from ‘The Commitments‘ for three minutes.
The girls’ plans, however, started to go awry when Michelle detected a disapproving expression on Erin’s face in Dennis’ shop when he revealed Michelle’s brother Niall was a paramilitary prisoner who could benefit from early release under the terms of the Good Friday Agreement.
The two of them had a blazing row, with Michelle vowing to have nothing to do with the Quinns’ party.
She intended to go to Jenny Joyce’s bash instead, dragging James reluctantly along with her.
Orla and Erin were left sharing their party in a church hall with some kids making their First Communion, while Clare’s attempts to broker peace between her warring friends faltered.
Sister Michael, meanwhile, received some bad news when Peter Campion’s Fr Peter told her that the Bishop was of the opinion that it was time for her to move on to a new challenge.
Would Sister Michael really leave her beloved Our Lady Immaculate College?
Would Gerry be able to get Eamonn out of the family home?
Would Joe be able to properly explain the intricacies of the Good Friday Agreement using a noticeboard and two packets of Northern and Southern Irish Tayto?
And would Erin and Michelle be able to bury the hatchet?

After a third series that delivered laughs but never quite reached the heights of previous series, Lisa McGee somehow managed to come up with the best ‘Derry Girls’ episode ever.

It was smart. It was very funny and it brilliantly referenced previous episodes – often very subtly.
Every major character was given a moment for the fans to savour – whether it was Sarah’s demand that the uniforms for the new police force must “work with our complexion” or Kevin McAleer’s long winded anecdote about Tommy Duddy spoiling his vote by eating the ballot paper.
Bronagh Gallagher turned up to sing ‘Proud Mary,’ while Liam Neeson’s senior police officer also briefly returned.
If we thought his appearance in the first episode of the final series was the top secret cameo to top all top secret cameos, we were made to think again.
(MAJOR SPOILER ALERT!!)
After heartwarming final images of the show’s various characters voting for the Agreement and even Joe skipping to the strains of ‘Dreams‘ by the Cranberries along with his youngest granddaughter, we fast forwarded to the present and a postman delivering a letter in New York which had gotten lost on its way to the White House in the 1990s.
The recipient was Chelsea Clinton who read the letter from Erin, Orla, Clare, Michelle and James which fans will remember from series two.
It was a brilliant masterstroke from McGee and director Michael Lennox, given the Clintons’ link to Northern Ireland’s peace process, in a feature length episode that just eclipsed everything the previous six episodes of the final series had to offer.
Even the choice of music was spot on, with tracks from Jamiroquai, Cornershop, No Doubt and The Corrs’ ‘So Young‘ playing as Chelsea Clinton read her letter.
Last night’s finale really was the episode to end all ‘Derry Girls’ episodes.

So after 19 episodes, what are we make of Lisa McGee’s show?

Well despite what some people might argue, ‘Derry Girls’ unquestionably raised the bar for TV comedy from Northern Ireland.
It did that by Lisa McGee sticking to the old writing maxim – write about what you know.
Her show wasn’t just about the madness of the Troubles.
It was about people getting on with their lives in spite of conflict.
It was about a convent school modelled on Thornhill.
Specifically, it was about four teenage girls and a wee English lad wrestling with their insecurities.
And it was that ability to capture the uncertainty and naivety of teenagers and to celebrate their hopes and dreams that made ‘Derry Girls’ a hit not just with Northern Irish audiences but around the world.
Not every episode was a home run.
Of course, not.
However there were many funny moments throughout its entire run and some memorable one liners that will live on.
McGee also couldn’t have asked more from her cast in bringing her quirky characters to life.
The show deservedly propelled Jackson, Coughlan, O’Donnell, Harland, Llewllyn, McSweeney and Clarke to stardom.
But it also reminded audiences why McElhinney, Tiernan, O’Neill, Campion, McAleer and O’Hanlon should be really treasured.
Unlike all of the Northern Irish sitcoms that preceded it, the acting in ‘Derry Girls’ wasn’t hammy and the writing wasn’t clichéd.
And while ‘Derry Girls’ may not have always been Champions League material in the world of comedy, it wasn’t far off.
If truth be told, most of the time it felt like a Europa League contender.
However as last night’s concluding episode proved, the show was capable of moments of real greatness.
As final episodes go, few comedy series have ended as impressively as ‘Derry Girls’.
So take a bow, Lisa McGee. As finales go, that was sublime.
We look forward to seeing what you do next.

Dan McGinn is a journalist who was previously the Ireland Political Editor and Ireland Deputy Editor of the Press Association and has worked for the Irish News, Belfast Telegraph and other publications and for TV and radio. He currently works in communications and public affairs and is also a film and television critic with his own blog They’ll Love It In Pomona which covers the latest cinema and television releases.

Rugby – A Clean Sweep by the Irish Provinces…