The obvious tactical voting for Independent Unionist Lady Hermon in North Down Westminster elections cannot hide the strong decline in Unionist vote share over the last decade. In the 2011 elections, unionist votes were worth 4.1 and 4.2 quotas. Eight years later that had dropped to 3.4 and 3.3. If they can hold on to that next month it should guarantee them 3 seats, but the leakage of transfers from UUP and Conservatives could leave them closer to the tipping point.

Lady Hermon turned the party chart into such a multi-coloured spaghetti dish that it is easier to see the underlying pattern with Westminster elections removed.

My Central projection from the Lucid Talk poll gives the following pattern (remember to allow for the margins of error in the poll and in this projection). 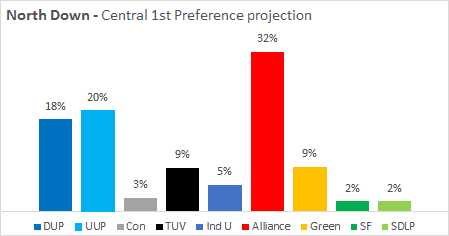 I have deviated from the percentages above when projecting the Assembly quotas for the DUP in order to accommodate the Independent Unionist. (More on this below.)

This would mean that quotas per candidate might look something like this. Seats won in 2017 are highlighted in gold 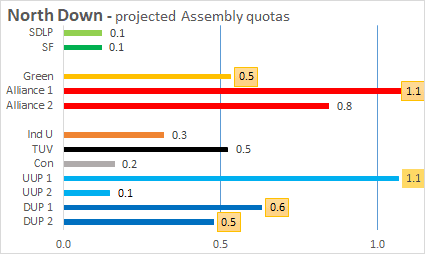 The division of UUP and DUP votes between their candidates is the same as that in 2017. Alliance is as it was in 2016 when they last stood two.

There are three Independents standing.

Ray McKimm – was elected to the Council for the first time in 2019, for Bangor Central, with 503 votes. He has the backing of Jane Morrice, formerly of the Womens’ Coalition, which may suggest that he would attract a good proportion of his votes from Alliance and Green. Since taking a Council seat as an Independent from a standing start is no mean achievement, even in North Down, he may well win additional votes outside his Bangor base.

Alex Easton – who was first elected 19 years ago and who served as a DUP MLA until he quit the party last year. I have shown him on the above chart with a highly speculative 0.3 of a quota, which I have subtracted from his old party, but it could prove to be more. The two main factors which are likely to determine the size of his vote are a) his personal vote and b) his ability to profit from the dissatisfaction of former DUP voters.

At the last election, he attracted 8034 votes – almost 1.3 of a quota. Of these, 940 failed to transfer to his DUP running mate – which meant nearly 12% of his vote was clearly personal. For comparison, the politician with the highest non-party vote was the UUP’s Alan Chambers, with 18% of his 1st preferences avoiding his running mate. Clearly, Easton will also have voters loyal to him personally who were happy to give their second preference to the DUP last time. There is no way of measuring this. My speculative guess is that he could have up to 2000 truly personal votes. That is the 0.3 of a quota you see in the chart.

As to his ability to attract dissident former DUP votes, my projections of the Lucid Talk poll suggest that the TUV, which has made little impression on the constituency since 2014, could have around half a quota this time. If Easton can also attract around half of these, he would be in with a chance of winning a seat. But if he fails to hit half a quota on the first count his chances are very slim indeed.

Failing a win, Easton could still affect the result if he became a non-eliminated runner up. In doing so he could be tying up potential transfers which would change the allocation of the fifth seat.

All that said, my three projections agree that there would be four Safe seats, 2 Alliance,1 DUP and 1 UUP. If Easton does not take the fifth seat, a second DUP, a second UUP, the TUV and the Greens all have a Good possibility under at least one of the three projection methods. Although the UUP could have difficulty achieving the necessary balance of their ticket, given that the Alan Chambers brand is bigger than the UUP brand in North Down.

There is no perfect way to translate a national poll to a local constituency level. Still less so in a PR system. We must recognise a level of uncertainty. I have used the last Lucid Talk poll as my base because, as well as giving party shares, it also tracks how the voters for each party at the last Assembly election intend to vote this time. This allowed me to make two projections for each constituency, one based on vote switching since 2017, the other on changes in party vote shares since the 2019 Local Government elections. (I used the LG elections due to widespread tactical voting at the later Westminster.)

The two different projections mimic two different patterns of changes in party support. In one, a party that is growing strongly will see a bit less of that growth where it is already strong, and a bit more where it was previously at it most weak. Conversely the parties that have lost voters will suffer a bit more in their strongest constituencies.

The other projection has the opposite effect. Either may prove to be a more accurate reflection of reality. And while the differences between the two are not massive (they both must total to the same poll shares across all constituencies) they can still sometimes produce different outcomes.

I should stress that while the Lucid Talk bears the responsibility for the original poll, the projections are entirely my responsibility.

For each 1st preference projection, I have used recent transfer patterns to identify all candidates who have any chance of winning on a scale ranging from Safe to Long Shot.

To avoid burdening you with all this detail I have averaged the results of the two projections and shown them as a Central projection, merely noting where one of the other projections produces a noteworthy difference.

Where a party is running more than one candidate, I have generally split the party vote between them in the same proportions at the last election. I have had to make my own assumptions when a party has a different number of candidates this time.

Michael Hehir is a retired sales and marketing manager. He studied in Northern Ireland but now lives between England and Italy.