The oddest thing that happened last week was the sudden disappearance of a border poll as a talking point which happened almost just as the campaign began. It was an oddly precipitous shift in focus for Sinn Fein who had been fundraising like mad in New York on that theme just weeks before.

I can’t be certain but I suspect that the sudden shift in campaign focus may have something to do with the very comprehensive polling on the current desirability of a united Ireland, first of all in principle overall, and then tested thoroughly in seven separate and very specific policy areas.

This morning I discuss the telling detail of that poll, and why it means that without a substantial shift in northern nationalism’s tactical approach to what the current Taoiseach refers to as a #SharedIsland the prospects for a successful border poll are probably dead for the foreseeable future. 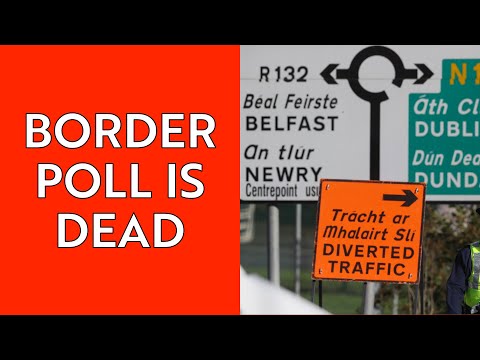 Now SF has switched (last minute) onto the SDLP’s ground, ie the cost of living crisis. The poll will also dent the DUP’s [Lifeline? – Ed] appeal to vote against the encroaching ‘danger’ of a 50%+1 that their rivals and long term partners in government Sinn Féin have been threatening for five years.

For example to the statement “The next Executive should prioritise jobs, health and welfare over constitutional issues” to the response is pretty unambiguous. Some 74% of all respondents agree. And of those, a higher proportion of nationalists give it their positive assent than unionists.

I argue advocates of a border poll have failed to grapple with two key elements of the Belfast or Good Friday Agreement. One, the Northern Ireland Act of 1998 says that the Secretary of State must be clear that exit is a likely outcome (ie, not “don’t really know”, where 50%-1 is just as likely as 50%+1).

Secondly, there are NO OUTRIGHTLY POSITIVE answers to questions on a united Ireland that probe practical aspects of constitutional change. This focus on border poll also ignores the new moderating (and optimistic) conditions in the Irish Constitution passed on foot of the GFA.

In throwing prudence to the wind, and trying to force both the pace of change and its direction, Sinn Féin has slowed progress to a slow and stop. It also has implications for the DUP. If SF leadership has barely shifted the dial on unity in nearly 20 years, how threatening are they to the Union really?

As the American Futurologist Kevin Kelly noted recently, long termism is vital to some class of ‘civilised’ future:

The best civilizations create things that take generations to build and whose benefits reward not the builders but those who come after them. Present benefits in fact may be sacrificed for greater benefits to future generations. That is called being a good ancestor.

I wasn’t fan of Colum Eastwood’s spring conference speech overall, but when he remarked that “collapsed institutions and collapsed relationships in the North are a major blockade on the road to a New Ireland” he could have been speaking in anticipation of the overall findings of this poll.

Or as the man once said…

“Enjoy present pleasures in such a way as not to injure future ones.”