Well, the sparks certainly flew in the Dail this week. That’s probably to do with the fact Irish government regulations (which have been, with the exception of Christmas 2020, excruciatingly tight throughout the Covid period) are lifting. Like melt water freed from the glacier out came the key issue of the 2020 election: the ongoing disastrously acute rental housing shortage in the south.

This Newstalk video (as did much of the southern press) focuses mostly on the passionate bits (and Mary Lou’s ill advised attempt to invert the relative class backgrounds of herself and the Taoiseach). Unfortunately it leaves out Mary Lou’s original question which is the foundational piece for the more substantive parts of the exchange that follow… 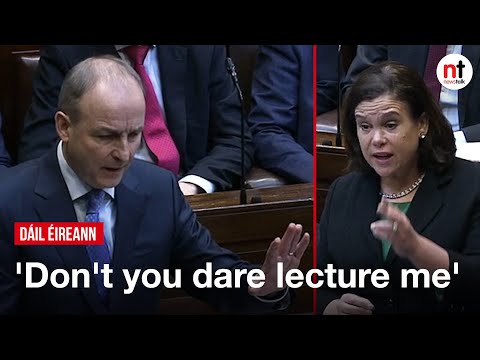 She led off led off with a stinging attack on the government, particularly with regard to the fact that it is currently a very long behind its own promised schedule:

All of this is true. The housing for all plan published last September (laid out with commendable clarity here)  promised over 10,000 new social homes per year to 2030. However at least some of her case was addressed directly in the Taoiseach’s reply:

We were stymied and knocked back a bit due to Covid-19 in terms of the two lockdowns experienced in 2020 and 2021, but we have bounced back well in terms of construction. The good news is that up to 30,000 commencements have been recorded in the 12 months up to last September.

Now, a little bit of context here before we press on. The Daft.ie report on housing on the third quarter of the current financial year, makes for sobering reading. The rise in rents is twofold. The rate of increase nationally (not just Dublin where shortages are most acute) is 6.8%, but this is the 36th quarter there’s been an annual increase from the year before.

In terms you or I could understand, that’s nine years on the hop. In other words it goes right back when the recession began to level out after the crash. That’s a major policy failure in anyone’s language. The near term reason is that the previous minority Fine Gael led government merely tinkered on the edges of the problem with small scale, and often temporary measures.

But there are deeper reasons too. The truth is that up until the 1990s, Ireland did not have housing shortages. Pretty much from famine onwards, the island was a net exporter of people, and most particularly of an exporter of its young. Housing building was small scale, aimed at what had been traditionally larger families.

Moreover most of the development took place at the edges of urban areas which in Dublin meant pushing out in to the surrounding county. Unlike other modern European countries of a similar size, Irish planning laws were never needed to calculate how to build housing in the the complex metropolitan spaces of the city.

Then came access to the single currency when banks’ traditional concerns about borrowing were suddenly lifted from their shoulders, and instead of falling the population rose. At first planning laws were barely stretched as most of the land being rezoned was open and houses were built without need for the tighter regulation that’s common elsewhere.

The urban myth is that the government did not build houses. But this is not strictly true. Whilst supply pushed prices down, new forms of cheap credit pressured them back up. The supply of  the sort of smaller properties most needed in the modern era has all but dried up to the point that in that same third quarter there was only around 800 homes available for rent in Dublin.

So as we go back to that Wednesday morning shouting match in the Dail, keep that question of short supply firmly in mind. Here’s the bit where it all kicks off big time:

Supply is important in ensuring affordability and an adequacy of housing availability across all the different models. Housing for All allows for cost rental, affordable homes, social housing, as well as private sector investment which we need. Housing for All estimates that we will need approximately €10 billion per annum of private investment in addition to the State investment of €4 billion per annum. This is an unprecedented approach to housing but we need everybody on board. I was struck by this and said it to the Deputy yesterday. When we sanctioned at Cabinet the O’Devaney Gardens project yesterday, it is an illustration of what is holding back housing policy in this country…

He proceeded through a maze of hecklers…

…that the most recent attempts, which started in 2008 and attempts were made in 2015 to get that project off the ground, was defeated by politics… on a consistent basis. What the Irish people cannot afford and what the renters cannot afford is Sinn Féin and others – I apply this to everybody – consistently opposing housing projects that will increase supply. Sinn Féin has opposed the O’Devaney Gardens project. It has opposed developments on Oscar Traynor Road. It is estimated that Sinn Féin has opposed the construction of 6,000 homes. It does not stack up.

Sinn Féin’s performance on the ground in councils the length and breadth of the country cannot be reconciled with what Deputies are saying in this House. If we agree it is a crisis, and I do…  It is a crisis, but the most effective way of dealing with it is to get housing supply in place and to give people strength and capacity in terms of incomes and jobs. At least there is good news this morning in that over the coming years the Central Bank is projecting another 167,000 additional jobs. We are responding well to the Covid recession to an extraordinary degree in terms of the jobs that will be created.

Now, as one of the SF hecklers noted, Mary Lou’s question was about soaring rents. However, Sinn Fein’s substantive response in the debate was pretty limited…

Neither of which actually tackles the supply problem. Whilst I’m sympathetic to their case that public housing should be a default going forward (it is not as inimical to home ownership as some suggest since it enables couples to earn a disposable income they can use for savings), but a tax reduction won’t touch the issue of there being too many people chasing too few properties.

Not only does this create the impression that Sinn Fein wants the southern housing crisis to roll on until the next election by voting down almost every housing project the government proposes (in areas of acute need, precisely like the sites at Oscar Traynor Road and O’Devaney Gardens), they also don’t seem to have any practical alternatives. [Their cost estimates are little out too! – Ed]

Of course there are downsides to the government’s policy of bringing in institutional investors. The massive increase in housing and development of a huge pipeline will also inevitably bring up new issues for the country’s relatively recently upgraded planning laws. There will be failures. Anything that it is done in a hurry will generate such issues. But the housing shortage is acute.

The one thing that remains consistent across the world is that rents only really can come down: one, if you build publicly; or two you increase the private sector supply. In persisting in protesting against the one they cannot influence until the next election and blocking new builds because they of the wrong type risks putting themselves in the firing line next time around.

In one last footnote there was side remark (the significance of which, I’ll be honest, I don’t really understand) towards the end of the exchange from the Taoiseach to the effect that…