Belfast’s tenth annual 4 Corners Festival (30 January-6 February), begins in a week’s time. One of the aims of the inter-church festival is to inspire people to visit and explore all four corners of the city, especially areas they have not ventured before. The festival’s popular ‘Wonderful Wander’, which takes place this year on 5 February, is a guided walk that encourages people to see Belfast in a new light.

Caroline Clarke from Belfast shares her experiences of last year’s Wonderful Wander, which due to lockdown restrictions was available as pre-recorded, downloadable MP3 walking guide that people could follow at any time. Like many others, she hopes to join this year’s Wonderful Wander, which will traverse part of the new Belfast City Council Forth Meadow Community Greenway, a £5.1 million EU PEACE IV-funded project connecting existing open spaces in north and west Belfast.

A Wonderful Wander Through Belfast …

It was April 2021 and another empty lockdown Sunday stretched ahead invitingly. It felt like the perfect day for a second attempt at the ‘Wonderful Wander’.

Back in February I’d meant to do it on the appointed day and hour, but early on I realised I’d missed where the podcasters had turned at Ormeau Bridge and was heading up the wrong side of the river. After just a few minutes in the perishing cold with the sky threatening snow and feeling like a bunch of friends had got fed up waiting for me and went on and there was no point trying to catch up with them, I’m not proud to say it but I abandoned the idea of a wonderful wander and tacked back to the Ormeau Road for a flat white instead.

So today it’s take two and I have a more successful tale to tell. One that would end with me standing in the fresh spring sunshine, wires dangling from my ears, reliving my youth in the middle of a mothballed city centre commandeered by hungry seagulls and pigeons and here and there kind citizens handing out pandemic essentials from the back of vans to those in various kinds of desperation and need.

This time I started at the right place and paid proper attention to the voices in my ears who would be my friendly guides for the next few hours: Jim Deeds, a West Belfast pastoral worker and David Campton, a Methodist minister from the East of the city. (Below – the YouTube video guide to the 2021 Wonderful Wander.) 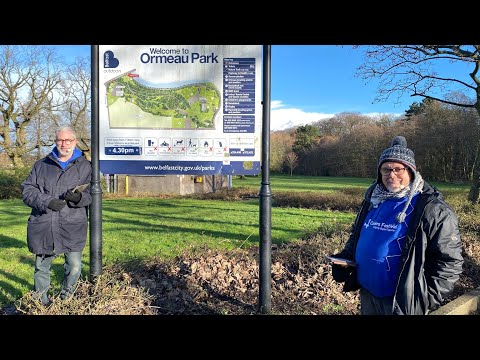 Rounding the end of the bridge and making my way along the embankment with the Holylands to my right, I paused by the railings to watch a couple of small black-headed gulls circling over the river. After each loop they wheeled back to the bank and hung perpendicularly in the air as if about to drop into the mud at the water’s edge before thinking better of it and flapping madly back up for another lap. As I watched their reflections skim the fat white clouds mirrored in the water, Jim read his evocative poem ‘The Smell’ about a Belfast river.

As it happened, this was to be the only part of the Wonderful Wander where I synchronised with the podcasters and was actually in the right place at the right time – it’s one thing to be in a group listening to a tour guide and another to be on your own loitering at crossroads or peering up at landmarks! As a result I sometimes kept walking so as not to appear weird or like a tourist and then had to retrace my steps.

The poem brought to mind my dad’s job in the early 1970s which had been to dredge out the Lagan down at the docks. One day after work he opened the front door and reached into a plastic bag to produce a Jaffa orange and a pristine white dinner plate stamped with a navy NIR logo. Those unwanted items tossed overboard were exotic treasures in our eyes! And now that I think of it, dad arriving home from work was always the happiest part of the day. Later in his next job he would bring in the smell of the fish wholesalers when he opened the front door in the evenings. He knew all the best chippies in the greater Belfast area!

The completion of the dredging works banished the stench of the river at low tide. Before that it would penetrate into your airways when you were around that area, say on a walk to the Ulsterbus station. Thinking about memories of the Lagan, one of those Troubles-era images came to mind that for some reason out of hundreds of similar scenes played out on the 6 o’clock news, left an imprint on my memory. This was the sight of the police carrying out their grim task of filling body bags in the smoking rubble of what had until that day been Oxford Street bus station. I was only a small kid at the time but it gave me a familiar heartsick feeling that seemed to be repeated day after day, year after year, tit for tat. That all seems like another Belfast now.

Onto the PEC where an event which completely passed me by at the time – a celebration in 1971 of the 50th anniversary of the establishment of Northern Ireland – had taken place. I had time while the guys filled in this gaping hole in my knowledge to nip up to Stranmillis for a takeaway coffee and rejoined them to wander through Botanic Gardens and out past Queen’s.

By now I was beginning to observe the city in a different way and realise how much I normally noticed – or more accurately didn’t notice – of my surroundings.

I felt validated at Shaftesbury Square on hearing that I hadn’t been alone in feeling a mental question mark when my parents pointed out the strange flying figures that appeared one day on the Ulster Bank. For a brief minute the furtive sliding and nipping in the back seat of my dad’s red Ford Cortina stopped as we obediently peered up at the greenish lumpy man and woman who seemed to be sailing off in different directions high up on the wall. They were quickly out of sight as the car continued on the familiar roads back to York Street, but from then on would become a signpost to sleepy children that we were nearly home.

Down in Bedford Street as I stood outside the firmly-shuttered doors of the Ulster Hall, I learned that it was where Led Zeppelin had played ‘Stairway to Heaven’ for the very first time! I had no idea 1970s Belfast could lay claim to such an impressive debut.

The guides moved onto a brief skirmish with punk and something called the Battle of Bedford Street involving rioting youngsters. They had just started reminiscing about a Whitesnake concert when my phone data decided to die. The perfect moment, I decided, to bring to an end my wonderful wander, standing in the sun transported back to the carefree joy of being a teenage metal fan in the middle of the Troubles. For a moment I was back on the last bus home with smoke-stained windows and the drivers gleefully racing each other to the lights sending the odd lolling drunk sliding about his seat. (Well, it was pre health and safety days…)

What I took away from the Wonderful Wander was the experiences we have in common regardless of the ghettos in our city and our minds. I look forward to doing it all again this year, hopefully not on my own!

The 4 Corners Festival seeks to inspire people form across Belfast to transform it for the peace and wellbeing of all. All events are free, with the option to attend in-person or online. You can register for events here.