We are 104 days away from the Assembly Election. Set for Thursday 5th May, we will be able to decide who we want to take Northern Ireland forward for the next few years.

Where will the parties be targeting and defending? I have put together a list of where is under threat for each of the main parties and where could they make some gains. These things are moveable feasts and dynamics can change throughout the campaign.

Sinn Fein-Currently holds 27 seats. A majority of their MLAs are based in the West of Northern Ireland.

The low-end potential seat count would be 20 seats with 28 as their high end. The expectation is that they will return with diminished numbers with North Belfast. West Tyrone and Foyle posing issues for the party.  If all three fell, that would bring them to 24 seats which is the ballpark that they need to emerge as the largest party. Look out for West Belfast and North Antrim, possibly the third in Newry and Armagh, if one or all of these falls, they are in for a bad night and will not emerge as the largest party. 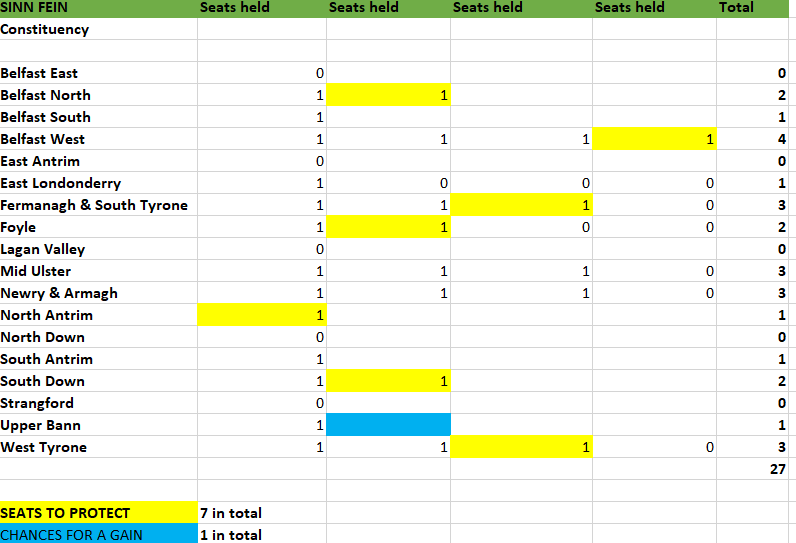 DUP-Currently holds 28 seats. A majority of their MLAs are based in the East of Northern Ireland.

Heading into the election after a horrendous year with leadership challenges and bad polling. The party does have seats to protect, but 2017 does offer some protection from a swing away in support. In only one constituency does the party hold more than two seats, in the others, they hold one or two with a buffer that can sustain some swing away. Now if the current polls are right this would still see some seats fall. On current numbers, the party is most at risk in seats like Strangford and Foyle. At the high end, the second in Upper Bann and North Down are at risk. If you see these seats in the East fall, they are in for a bad night. If they hold Foyle and maybe pick up West Belfast, they are in for a good result.

Alliance Party currently holds 8 seats. Half of their seats are in the Greater Belfast area.

Alliance can be the most optimistic heading into0 the election. Normally they were used to getting in on the last seat in the few constituencies that they were successful in. However in 2017 most Alliance MLAs were re-elected much earlier in the count, making these seats much safer. At this stage, the party are targeting gains across Northern Ireland, significantly there are mostly at the expense of nationalist parties and many outside of Belfast. To start with, South Down, West Tyrone, Upper Bann  and North Belfast are the four top targets for the party. Just beyond that is North Antrim, East Antrim and the second in Lagan Valley. If any of the latter three fall, they are on for a historic result. If they miss out on any of the former four seats, they will end up closer to 10 seats. High end for the party would be 16 seats, with 10 at the low end.

SDLP currently holds 12 seats. One third of the current MLAs are in two constituencies, South Down and Foyle.

This election is a mixed bag for the SDLP. They have some golden opportunities for growth but are also fighting to defend in places. On the opportunities, the easiest place for gains are in places like Strangford and Foyle. Both gains would come at the expense of the big two parties. Higher up the target list are places such as Fermanagh/South Tyrone, followed by West Belfast and South Antrim. But there are seats that require defence such as the second seat in South Down, Upper Bann and Lagan Valley. At the low end the party could come back with 9 seats, but on a good day could come back with 14 seats plus.

The UUP had a brutal election in 2017 losing three net seats across Northern Ireland. The party has according to polling had a bit of a lift under its new leader, Doug Beattie. The party is vulnerable in its second seat in East Antrim to the Alliance Party, but the others looks relatively safe. Gains on the most recent elections look difficult, but there are some places that could give the party a lift. First is the seat of South Belfast which proved competitive in 2017 . Higher up there is Newry and Armagh and then North Belfast.

David McCann holds a PhD in North-South relations from University of Ulster. You can follow him on twitter @dmcbfs