It’s been a week in politics where one politician tried (unsuccessfully) to be a comedian and a comedian very much succeeded in sign posting the way towards a better future.

But I’m going to let Richard Buckley, editor of Business Eye magazine, do the formal introductions via his monthly newsletter…

Paddy Kielty has long been one of our more erudite, balanced and intelligent exports. He’s a whole lot more than the comedian most of us know him as. In his Shared Island Forum speech, he talks about just that… how we can, how we must and how we already are sharing this island.

Some of it is powerful stuff. His stories about attending an 11th night bonfire in July and about how he met and swapped stories with veteran Loyalist and senior UDA figure Jackie McDonald are particularly powerful given the fact that Kielty’s father Jack was shot dead by loyalist terrorists in his home town of Dundrum in 1988, aged just 44.

For the relatively few out there who haven’t heard it, here’s a ten minute clip. And, if you can’t spare that long, get over yourself… 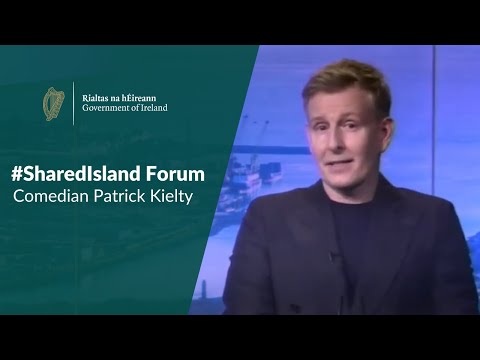 I missed Paddy’s breakthrough shows at the Empire and then on local TV, but despite what he says here he never lost his nerve in making Northern Ireland a bigger warmer place than it had been before.

I was particularly struck by these lines from Paddy….

A shared island means challenging ourselves to go beyond our own comfort zones. What we are prepared to give up to make things better for others, and ourselves.

In this year of centenaries, it’s easy to honour the ghosts of the past, it’s easier to sing a rebel song about a united Ireland than decide not to sing it in order to have one. Yet, we have to be honest with each other about who we are, how we feel and it’s not just trauma that gets passed down, it isn’t just a northern thing.

Across this entire island, not talking and not engaging means that other things get passed down too – one-sided history, stereotypes and, maybe the worst of all, apathy.

It’s easy in a post-Brexit world to sit in Dublin and say the British Government doesn’t care about north when the truth is for many people in the Republic, they aren’t particularly interested in it either.

It builds upon some of his experiences captured in a recent documentary on the 100 years anniversary of Northern Ireland. An “erudite, balanced and intelligent export” indeed Richard.

Instead of worrying about how many of our kids end up moving away, perhaps we should consider the brilliant flashes of insight and intuition we can derive from them when they come home?

Paddy’s talent was to channel pre-existing tensions, take them to break point, let the deluge of laughter undo our collective fears and allow us to take back control of our lives, at least for a night.

As a wiser man than me once said, “In this country we need to be extremely vigilant about the stories we choose to tell ourselves”. Paddy is an honest, faithful, insightful story teller, to whom we should listen.