During this year’s C. S. Lewis Festival in November, EastSide Partnership held an event to mark and celebrate the extraordinary achievement of the BBC’s Year ’21 podcast.

Year ’21 reconstructs the events of 1921, week by week, using ordinary people’s stories, archival research and insights from expert historians. It explores the year of Northern Ireland’s formation in surprising and original ways. Approaching 500,000 downloads so far, Year ’21 has already been nominated for a variety of awards and is being used in ‘A’ level classrooms as a teaching resource.

Over the evening, BBC’s Tara Mills and Declan Harvey, public historian Dr Éamon Phoenix and Jason Burke from the Historical Belfast podcast, reflected on how the project emerged and took on its distinctive voice and shape. 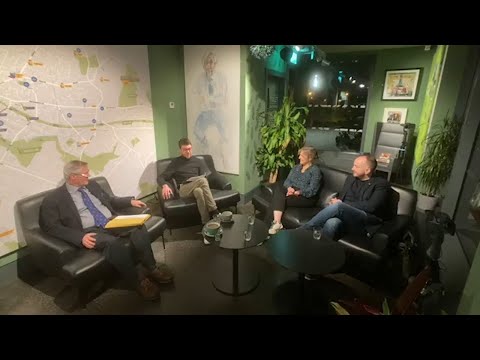 Marking Northern Ireland’s centenary was never going to be an easy task. Partition was a process that, as we heard over many episodes, continues to have a deep emotional impact on many people today. Making something that listeners from different political persuasions would actively want to tune into, must have seemed like an impossible task at the beginning.

And yet, somehow, Year ’21 achieved this. The podcast found ways to capture these emotions with great sensitivity. The loose and exploratory feel of the show is a large part of its success, to which huge congratulations to producers Elaine Dunseath, Grainne McFadden and Paula McCann, as well as the hosts, are due.

While bringing in an impressive amount of historical expert analysis, the podcast was not proscriptive. Histories were told from all angles. People were allowed to speak in their own words. Listeners joined the team on a journey of discovery, rather than being told what to think. There is much to be learned from their approach as we continue to deal with our contested histories.

Probably one of the most remarkable things about the podcast is the way the audience began to involve themselves in the show over the course of the year. Tara and Declan told us how they received messages from around the world, from people who wanted to share stories and memories of the time. These voices were incorporated as they went along, coming to form an integral part of the podcast. In episode 46, Dr Éamon Phoenix reveals his own personal connection to the topic, how his grandfather nearly died in the violence of 1921.

During the evening, panellists shared stories from behind the scenes. We heard how some of the soundscapes were created by cajoling families and friends to read political speeches, recite rosaries, re-create crowd sounds, and whatever else was required. It was incredibly poignant to hear how a 9 year old Declan Harvey interviewed his granny with a plastic tape-recorder and microphone, how his mum hunted out these old recordings from the attic, which turned out to be directly relevant and became included in the show.

In a year of frequently awkward centenary initiatives, Year ’21 was a breath of fresh air. Éamon Phoenix talked about how it had become more possible to talk about our difficult histories over the course of his career. All the panellists emphasised that listening, empathy and humanitarianism were the guiding principles of the project.

Thanks to EastSide Partnership and all the collaborators for this evening of reflection, made possible with support from the Northern Ireland Office and National Lottery Heritage Fund.

All 50 episodes of the  Year ’21 podcast are currently available on BBC Sounds.

The team leave behind an outstanding contribution to oral history on this island.

Claire Mitchell is a writer and researcher from Belfast. Formerly senior lecturer in Sociology at Queen’s University Belfast. More at www.clairemitchell.net