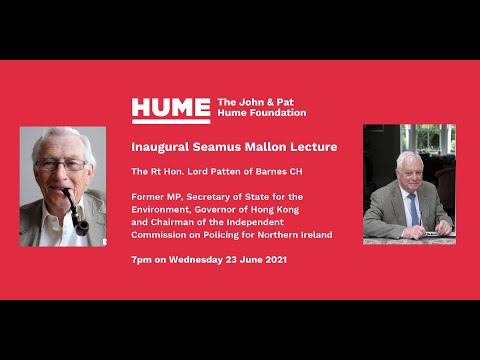 His talk looked back at his time as a direct rule minister:

“An appointment to the Northern Ireland Office was often compared with being sent by a Communist Party general secretary in the Soviet Union to manage a power station in Siberia.”

He recalled some of his encounters with Seamus Mallon, wishing that there were:

“more political leaders in Northern Ireland and beyond with the sort of courage, honesty and generosity shown in abundance by Seamus Mallon.”

He also recounted a moment from a Policing Commission public meeting when mother of a murdered man spoke out.

“You come over here and give us lectures about forgiveness and reconciliation, but this man here” — and she leant forward to touch the shoulder of the fellow sitting in front of her — “killed my son”. It was true. He was one of the IRA men released as part of the amnesty to secure the buy- in to the Good Friday Agreement of the Republicans in balaclavas.

Patten’s remarks turned to Brexit and the Protocol towards the end of his lecture:

How do you convince the Unionists of Northern Ireland that they are not going to be treated as though they are different from the rest of the United Kingdom when it comes to trade matters — the very point that Theresa May to her credit thought would be constitutionally outrageous. That is why she argued passionately for the Northern Ireland backstop which was rejected by the present British Prime Minister. Indeed his rejection of it was one of the steps on his road to Downing Street.

So in these circumstances what do you do if you’re this British Prime Minister now?

You give assurances to the Unionists and other MPs that you must know are not true. And you even get covered on television saying them, though I don’t notice the BBC, or Sky, or ITN showing those bits of film these days. You tell the DUP, and business leaders in Northern Ireland, that if they back your plan for what Fintan O’Toole calls “social distancing” from the rest of Europe, then whatever it says in a protocol to an agreement that you have yourself signed with the EU, as part of “an oven ready agreement”, just as there will be no border between the Province and the Republic, nor will there be a border between Britain and Northern Ireland. . Over our dead bodies. Scouts Honour. Dib dib dib. Fib fib fib.

Were the promises simply mistakes in interpretation? Can all be for the best if only the Brussels bureaucrats see sense? Can’t they see that if the marches held in Northern Ireland in July lead to more violence on the streets, if the politics of Northern Ireland are pushed back into the same old same old, toxic mayhem suffused with memories of past outrages, then it is Brussels that is to blame?

I am sure that the EU will try to find some ways of — what was Mr Johnson’s phrase? — “sandpapering ” the rough edges of the deal loyally negotiated by his apparatchik Lord Frost, a man who has made a speciality of reaching trade deals which produce less trade. But how far will the sandpaper have to go? The phrase “papering over the cracks” pales into nothing besides “sandpapering  over the border”.

European governments are now being asked, which clearly riles many of them, to make adjustments to the terms of the protocol in order to help Britain keep its word over a deal that we wanted and that we willingly signed. However provoked other governments may feel, there is surely sufficient room of manoeuvre to make some changes over issues like Trusted Trader status and the movement of pharmaceuticals.

But our own government at Westminster has much to do itself. For a start it must tell the truth. It must implement the legally binding protocol. It should explain, which happens to be true, that both communities in Northern Ireland are equally challenged by the way Brexit works. But they are given significant advantage through the protocol, as many have pointed out, to get the best of both worlds.

London must work in good faith with the EU to identify possible flexibilities in the application of the protocol, including flexibilities that are available to the British government itself. It is not for our Brexit government simply to wish away what it negotiated and blame any consequences on others as we face the marching season in July. We should be blunt about this. It matters to our international reputation.

The problem at heart is not the sausages you get from Sainsbury’s but the porkies that we all get, home and abroad, from Downing Street.

Answering a question about the possible role of the US in reaching out and showing respect to unionists, Patten quipped about the US Catholic Bishop’s current attempt to deny President Biden (and other liberal politicians) access to the Eucharist due to their support for abortion rights:

Later he caricatured the English Education Secretary as Kim Jong-Williamson in reference to the notion of a patriotic song about Britain that school children might sing at the start of the day, an idea that left him “wincing with embarrassment”.

The event was introduced by Orla Mallon, daughter of Seamus Mallon, and the Q&A was chaired by Dawn Purvis, vice-chair of The John & Pat Hume Foundation.