The Dublin-born civil servant started working at the European Commission in 1979, appointed as Secretary-General in 2000 and then becoming Director General for Trade between 2005 and 2010. He was appointed as the Ambassador of the European Union to the United States, serving between 2014 and 2019. 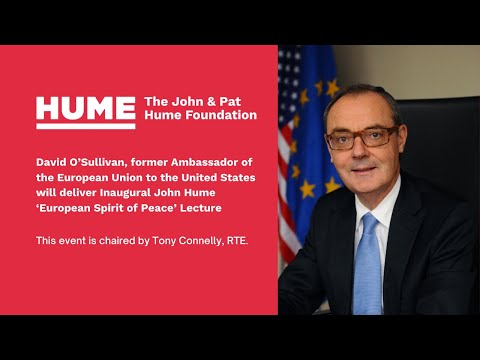 David’s address began with the memory of his father’s strong impression of a young man called John Hume active in the Credit Union that he had come across while working in Derry. Titled “The EU at 70 – still going strong?”, O’Sullivan looked back at Treaty of Paris and the EU’s “three fundamental objectives: peace, freedom and prosperity”.

He touched on Brexit and the “particularly toxic set of problems” it presented for Northern Ireland as well as the road towards the Northern Ireland Protocol which he described as a “peculiar animal”. He added:

“It is not surprising that Unionists find this unsettling. On the other hand, we did not get here by accident. All the other options were exhausted. This remained as the only one on which agreement could be reached. ”

While acknowledging that “reunification is a legitimate objective”, he warned that somehow conflating the constitutional issue with the practical aspects of the Protocol and raising the prospect of an early border poll “is deeply unhelpful” and could “destabilise many in the Unionist community”.

RTE’s Europe Editor Tony Connelly chaired the Q&A which raced through audience questions and touched on sausages, China, Scotland and the chances of a US/UK trade deal (“likely to happen but not very soon”).

The lecture was the latest in a series of online events hosted by The John & Pat Hume Foundation.