That was the question posed by Dympna McGlade at a recent discussion arranged by the John & Pat Hume Foundation. The vice chair of the Civil Rights 50th Anniversary Committee remarked:

“The Northern Ireland Executive is obsessed with agreements, but not necessarily their full implementation.” 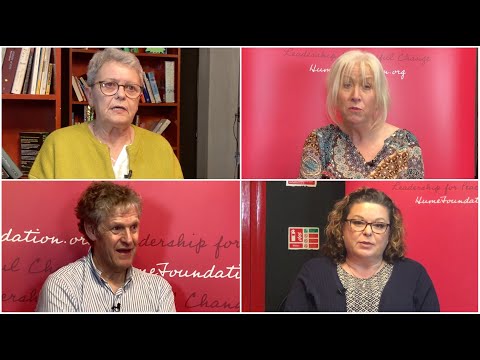 Since the Belfast Agreement we’ve had …

Have I missed any?

“Apart from tinkering around the edges and creating lots of new buzzwords and terminologies and trendy new ways to record output, I question the impact of all these policies on the areas worst affected by the conflict.

“Each new government policy/strategy designed to build the peace tends to water down terminology and aspirations so much so that they lean more towards community and economic development rather than peace and reconciliation.

“Therefore, I suggest that we move to the next phase of the peace process and produce a Peace Plan for the current time we are in: no fancy title; … no confusing terminology; simple and to the point ‘peace and reconciliation speak’ that people on the street will understand and hopefully buy into and participate in.”

In her address, Dympna outlined how “the politics of blame and disagreement” have hampered the once favourable conditions to build a lasting peace.

She called on politicians to “become leaders and champions in peace building, working collectively rather than as mini fiefdoms” and to take responsibility to the whole of society and not just their electoral base.

A Peace Plan should reflect the current context in which peace is being delivered, and build on what has been achieved to date. As well as a strategic framework and dedicated resources, it must include “a robust way to monitor progress to ensure we keep moving positively forward towards a united multicultural society” and “agreement to hear and act upon expert external advice”.

While Executive must deliver on its agreements and not undermine them – citing the example of ‘shared housing’ projects that were quickly owned by one side of the community – Dympna also highlighted that broad civic engagement was a “vital ingredient to successful peace building”.

“Voluntary and community groups should have the right to give their honest opinion and recommendations to government without fear of losing their funding or being side-lined when it runs contrary to political views.”

She said that approaches to legacy issues “have been piecemeal and need to be addressed in a time bound, inclusive, well-resourced plan to address all the issues contained in the Fresh Start Implementation Plan”.

“Until legacy of the past issues are tackled they will continue to cause disagreement, division and hinder political progress, reconciliation and economic growth.”

And she underscored the role of paramilitaries in impeding progress.

“If people moving away from paramilitary groups want to be involved in the transformation of society, then they must fit in with legitimate community plans as many of their colleagues have successfully achieved.

“Reconciliation is the beating heart of the peace process. Reconciliation and peace building shouldn’t be a chore. Nor should it be complicated. It should be as euphoric and exciting as the signing of the Good Friday Agreement was.

“Northern Ireland needs to make its mind up about what it now expects from the peace process. We can either push peacebuilding down under the weight of Brexit, COVID, recession and any other crisis you care to name, or we can develop a long term roadmap for the direction of travel in respect of policy interventions to deliver a shared, reconciled and multicultural society. If we choose to move forward then we need long-term intervention and political and civic commitment.

“The next phase peace plan will provide government with an opportunity to build on the strong foundation that have and push forward on addressing the outstanding issues and how to tackle them.

“John Hume said: ‘The real duty now, if we want to have a totally peaceful and stable country, is for all true democrats to implement the will of the people.’ As Bill Clinton said: ‘finish the job’.”

Eileen Bell (network coordinator at Shankill Women’s Centre) and Duncan Morrow (director of community engagement at Ulster University) responded to the paper in a discussion chaired by Dawn Purvis (board member of the Hume Foundation).

The hour long event was one of a number that is being organised, with another look at the Unfinished Business of Reconciliation being recorded in Derry next week.