“Unlike the moon landing of 50 years ago“, Bob Collins suggested that the current political turmoil would not land ”in the sea of Tranquillity”. He was speaking on the last day of the free-to-attend Debates on Europe event held in Belfast.

It’s a German initiative, and since its inception in 2012, events have been organised across eastern and southeast Europe “in places where the idea of Europe is at stake”. This weekend, the S. Fischer Foundation and the German Academy for Language and Literature took their first trip to ‘the west’. 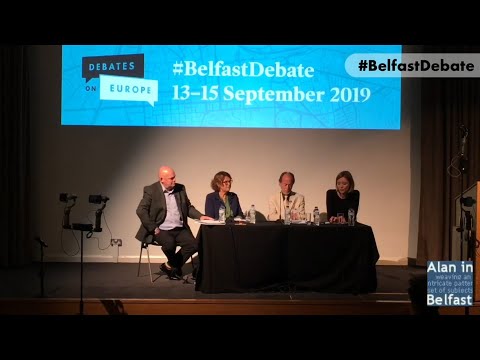 In conjunction with The John Hewitt Society, Peter Osborne chaired a panel with the title Asking the People: Border Polls, Referendums and the Question of Democracy.

Over the course of 100 minutes, themes emerged of inadequate leadership, inadequate preparation for referendums (and the wisdom of consulting nations like Switzerland and Denmark which have particular expertise in running them), as well as common difficulties between politicians and the press across Europe.

Angelina Kariakina is editor-in-chief of Hromadske TV in Kyiv, Ukraine. The station is an NGO and seeks to be independent from state control. She reminded the Ulster Museum audience that her country’s president was an actual comedian. (Some citizens are disappointed that Volodymyr Zelensky’s policies and actions haven’t mirrored his character in the popular series Servant of the People (first series available on UK Netflix) in which he played a high school history teacher who unexpectedly won the election and became president of Ukraine.) Her region had experience of referendums, with contested results of 2014 polls around the status of Crimea.

President of the Irish Association, Bob Collins said that “democracy is a very fragile thing” and suggested that the media had questions to answer about their assumption that “everyone accepts the current [political] orthodoxy” and a “failure to interrogate [and reflect] the lives of people” in Northern Ireland. With a political vacuum, populism, Brexit and border polls all up in the air, Osborne asked for a prediction about “where this will all land in the next five to ten years?”

“Unlike the moon landing of 50 years ago, not in the sea of Tranquillity”, Collins quipped. He worries that to the extent any real discussions are happening about a border poll, they’re one sided. He feels that “there needs to be clarity about what that change would look like”. Collins added: “I don’t detect the slightest sense in the Republic that the emergence of a United Ireland would alter people’s lives in the slightest respect, and that worries me deeply.”

Susan McKay, journalist and broadcaster commented on “a poll recently that said that something like 60% of people in the Republic would be perfectly happy with a United Ireland … but they say that without any thought of what it’s going to be like to have to listen to Ian Paisley Junior on the radio in the mornings and take seriously DUP demands for there to be a return to a regime in which a woman cannot have an abortion”. She highlighted the continued correspondence of areas across Northern Ireland with greatest poverty, and areas that are under the influence of republican and loyalists paramilitary. On an optimistic note she observed that “while there’s a lot of negativity, the North is incredibly vibrant compared with the Republic” and repeated Lyra McKee’s observation that the younger generation tends not to be “tainted by the bitterness of the past”.