I spent Thursday evening in Holywood filming a conversation between journalists and authors Brian Rowan and Deric Henderson. Organised by Creative Holywood, they read extracts from Reporting the Troubles, a compendium of compelling essays by 68 journalists who worked in Northern Ireland.

Throughout the evening Brian Rowan often pivoted away from pure reminiscence and returned to the subject of legacy, arguing for an inclusive and society-wide process that asked less about what had happened but instead focussed on why it happened and crucially why it should never happen again. 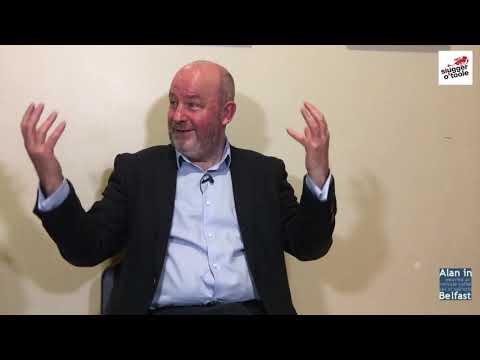 “We as ‘the conflict generation’ are shovelling our experience on the people who come behind us. So I hear young people … talking about things they could only have heard from us. And we need to think about the damage we’re doing in all of that.”

After identifying the switch from having time to report with reflection to the on-the-minute nature of 24-hour news and social media bulletins, and praising the talents of “some brilliant young journalists coming through here”, he added:

“We’ve all got to think about: do we want to do the right thing about legacy? But also how do we stop shovelling that experience on top of others?

“I think some politicians want to use the legacy process to recast the conflict on another stage. I was right and you were wrong. We won and you lost. There’s no bloody winners in that let me tell you … and that’s why I think this legacy process needs to be taken away from them to free people, if you like, to talk in some more open fashion about what happened, but more importantly about why it should never happen again.

“I think that’s the challenge. That’s what a legacy process should be about: why this should never happen again.”

Just a few hours, Lyra McKee would be fatally shot in Creggan. I’ll post footage of the full conversation next week.

Writing earlier that day in another place, Rowan noted that the NIO has completed its assessment of the responses to its legacy consultation (on structures for a new Historical Investigations Unit and an Independent Commission on Information Retrieval) and will now publish their analysis and perhaps also some options papers before “what is being described as a short, focused discussion, including with politicians here and in London”

Rowan elaborated on his own thoughts:

“There is little reconciliation, but rather this continuing battle that is deepening wounds – not healing them. A conflict cannot be half over.

“On legacy, we need a process that delivers the maximum amount of information from all sides – not the parade of shame we are seeing develop before our eyes. There should be no more jail in relation to the conflict period – not for soldiers or police officers, not for republicans or loyalists.

“This means grappling with the poisonous issue of amnesty – the word we’re afraid to speak. Let’s stop talking about truth – no side will deliver that. If we do not address the issue of amnesty or a statute of limitations across the board, then we will spend our time shovelling the conflict experience on top of next generations – burying them and ourselves in the Troubles years.”