QUB pro-vice-chancellor Professor Richard English delivered a 40-minute talk on the topic of Does Political Violence Work? during the recent Imagine! Belfast festival, a subject he wrote a book about a few years ago. His first four points addressed terrorism, while the fifth picked up on war. 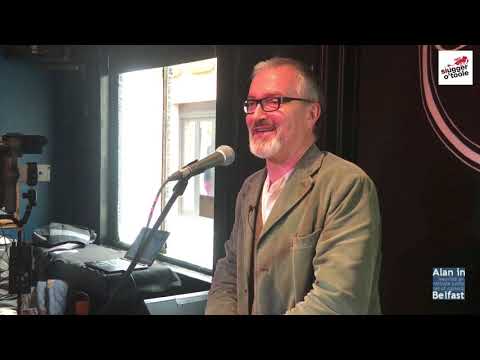 Early on, English clarified his use of the word ‘terrorism’.

“I would want to stress at the start, in using the term ‘terrorism’, I’m not suggesting that it’s really the right word. It’s one of those words like ‘radicalisation’ that is the wrong word, but we’re stuck with it. I used to write about political violence without using the word terrorism at all. I wrote a book on the IRA some years ago and basically didn’t use the word terrorism because it seemed to me that the word terrorism carries with it such a negative connotation that … there’s a value-laden quality to it, and I thought it was better to avoid it. But now I’ve changed my mind because the point is the word isn’t going to go away and if you leave discussion of non-state political violence to people who are happy with the word terrorism, you’re leaving it to Fox News and to Sebastian Gorka and others and I don’t think that’s what I want to do.”

He suggested that ‘does political violence or terrorism work?’ is an important question because “if you’re looking at why people carry out political violence they tend to do so because they think that it’s the only way, or the best way, of achieving something which is essential or precious … one famous, now-deceased member of ETA [said] that ‘the only possibility we have of gaining our Liberty is through violence’. So in other words, if we’re explaining why people do political violence, a crucial aspect to it is that they think it’s going to work and it seems to me that’s an essential basis for understanding.”

He submitted that when a terrorist incident happens, the media tend to “pathologise” saying that people are “crazies [or] gansters rather than looking at it as something which is seen as a practical way of bringing about something [they feel is] essential”.

“We can’t claim to understand political violence analytically unless we know the extent to which the ways in which it does or does not work.”

He added that “the ghosts of all of this are those shelves of books on one of the walls in my study which are the memoirs of politicians, and you rarely find politicians saying ‘that war that I justified was a really bad idea’ … and you rarely find after wars a unanimity from the people who have engaged in them saying ‘this is just a huge mistake’.”

English admitted that “I think it is a difficult question to answer”.

“I spent years writing the book … and I realised why no one had bothered to write one before … partly in terms of ‘terrorism’ because it’s very difficult to know how to define that word in a way that’s meaningful … people generally want to use it against those that they disagree with.”

Is terrorism only something that non-state actors do? Or do states do it as well?

“If like me, you think that most deliberately terrorising politically-motivated violence throughout history has been done by states, then you’re talking about [a] much bigger scale of violence.”

He went on to say:

“The relationship between non-state actors and states is what really changes history rather than non-state violence itself. Even if you look at this century and the last century both of which began with acts of famous terrorism – the assassination in 1914, which was the trigger of the first World War, the 9/11 atrocity in September 2001 started this century off – in both of those cases the merciless violence involved in those acts wasn’t what changed history.

English also teased out some of the differing meanings of terrorism ‘working’: achieving major policy objectives, getting publicity, interim concessions, …but the answer is unlikely to be a binary yes or no.

“In future years there will be the exam questions which [ask] ‘Did Brexit work?’ and people will automatically have instinctive answers to that, but it seems to me it’s unlikely to be a question adequately answered by a yes or a no.”

He also warned that “proving causation in human endeavour is incredibly difficult” and because terrorism is so controversial, it’s often unpopular to look at it dispassionately.

“If you go to a doctor, you don’t want the doctor to condemn cancer [and] thump the table and say it’s a many-headed hydra of evil that must be got rid of. You want them to give you some kind of diagnosis, explanation and possibly even remedy, and the same is true here … Unless we can think about this question calmly we’re going to continue to get the world wrong.”

English suggested that “we need a framework for what ‘working’ might mean” and outlined four layers to a possible framework:

So what’s the answer?

“I think the answer is that political violence – certainly in the case of terrorism, but I think in other kinds of violence it’s eerily the same – turns out to be just like most things that humans do, you rarely get what you most, most want? Strategic success is very rare amongst terrorist groups … it’s very unusual for a non-state actor to end its campaign getting what it wants.”

He added that it was probably also true of most warfare which has much greater levels of violence.

“But if strategic victory is unlikely, a decaffeinated, slightly-diluted version of it is much more common … (You could make the case that there was an acceleration of the urgency of reform in the North through it being high on the agenda) … and you will have a good chance of some tactical success … gaining publicity is probably the thing at a tactical level which is most common.”

He suggested that the media have “a tendency to exaggerate the significance and, to some extent, the bogus glamour of those who involved in [terrorism]” leading to some potential terrorists feeling “confident you get two weeks of publicity” for your cause if you carry out an atrocity.

There’s even an argument to give less media publicity to terrorism, especially since there are many things more likely to kill you, including (in the US) gun violence, car accidents, car accidents involving deer, accidents in the home, accidents in the home where something falls off your wall and hits you on the head, death by drowning, deaths by drowning in the bath, and English’s favourite statistic that “you’re more in America to be killed through auto-erotic asphyxiation than through terrorism and yet I think the war on auto-erotic asphyxiation is unlikely.”

“As in so many kinds of human endeavour, we post hoc rationalise … what we really wanted so we make it seem more justifiable to have done what we’ve done because we’ve claimed we’ve got more of that than we thought we did. [Or we say what we] really wanted wasn’t what we really wanted but were just using that as a bargaining chip … so it turns out that terrorism is much like business.”

As he finished, English turned to the subject of war.

“There’s a depressing disjunction between the reasons that states say they go to war and the emergent reasons for the thinking which actually took them to war. The multi causality behind going to war is rarely a coextensive circle with what you said you did it, and why you said you did it is almost always much more noble and lovely than the reasons you actually did it which are much more messy and morally jagged.”

There’s “an equally depressing disjunction between the reasons” for war and the reasons people fight in wars, often joining up for quite banal reasons (a bunch of mates join up together, you’re border, need the money etc) not connected with the cause. And how we remember why we did it doesn’t line up either.

“Far more that happens in war needs to be recognized as being terroristic than it’s fashionable to say” suggested English, who sees the “the distinction between terrorism and state violence [as an] ambiguous and porous line”.

“How often we should sanction using appalling violence? … There are fewer and fewer conflicts that seem to me close to being justified by what was supposed to justify them when you set the human suffering up against the achievement.