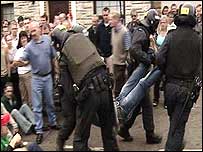 The Parades Commission has not only placed its usual restrictions on the Twelfth morning and evening parades by Dunloy LOL 496 but following last year’s illegal republican protest they have banned the Orangemen from assembling (note assembling not parading/marching/walking) outside Dunloy Presbyterian Church to lay a wreath in memory of war dead. Local Unionist and Republican elected representatives are meeting with the parades commission. (This thread has been updated and corrected, justin clarified the ceremony isn’t at a formal war memorial but a ceremony to remember war dead held at Dunloy Presbyterian Church).